The earliest Turkish rugs date from the Seljuk period in the 13th century. After the decline of the Seljuks, the Ottoman Empire gradually spread across Anatolia, absorbing the various mini-states that had appeared, as well as the many nomadic tribes that inhabited the region. 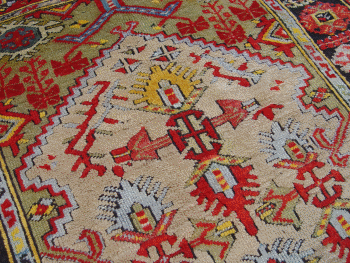 Most of the earliest rugs that have survived from the Ottoman period were woven in workshops in Anatolia, in such places as Ushak, Bergama, Gördes and Milas.

Turkish rugs appear in many early-Renaissance paintings by artists such as Lorenzo Lotto, Hans Memling, Hans Holbein and Giovanni Bellini. These carpets are today known by the names of the respective artists, who often favoured a particular type of rug in their works - "Lotto Ushaks", for example.

With the Ottoman victory at the Battle of Mohács in 1526, and their subsequent 150 year rule over much of Hungary (modern day Hungary & Transylvania), there was a further spread of the Ottoman influence into the European heartlands. Many carpets from this period have been found in the churches of Transylvania, and these rugs, although woven in Anatolia, are thus known as "Transylvanian rugs". 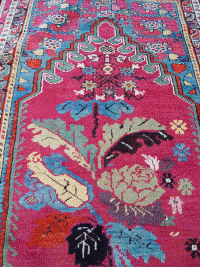 Relatively few 18th century Turkish carpets have survived, possibly due to the change in European tastes which accompanied the periods of Rococo and classicism. Interiors were idealized, with walls decorated with tapestries, and floors covered with embroidered Aubusson carpets.

During the 19th century, there was a "revival" of carpet making in Turkey, much of it with an eye on the export market, particularly as the Ottoman Empire became more impoverished. This upturn coincided with a renewed European interest in the Orient, related to the burgeoning Romantic movement.

As the 19th century wore on, this cultural interest developed very much in the opposite direction as well, with a gradual "Europeanization" of Ottoman tastes, most notable in the building of the Dolmabahçe Palace in Istanbul.

Our current stock of Turkish rugs includes antique, old, and more recent pieces, dating from the mid-19th century to the 1980s.