The Turkoman (or Turkmen) are a Turkic-speaking race who inhabit Turkmenistan, Uzbekistan, northern Afghanistan and north-eastern Iran. The main Turkoman tribes include the Salor, Ersari, Tekke, Saryk and Chaudor. Originally they were a purely nomadic people, but have become more settled since the beginning of the 20th century. 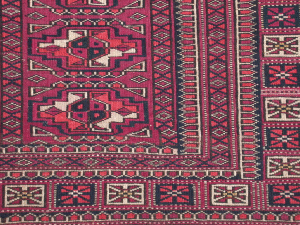 The geography and climate of central Asia dictated this development: the search for good pastures for their herds, and the need to follow sources of water, led to many people adopting a nomadic way of life. This existence was further made necessary by the frequent plundering and wars between the tribes. The Turkoman culture is deeply-rooted in equestrianism (as far back as 700 B.C.), and Turkoman horse-breeding has been an important activity for hundreds of years.

Turkoman weaving was (and largely remains) carried out by women. The importance of this skill was closely related to the family and marriage, as a Turkoman bride was expected to have a dowry, composed of various types of rugs which she had made in the years before.

The weaving of carpets by Turkomans as a commercial enterprise dates from the end of the 19th century, and was closely related to the growing Russian domination. Increasingly impoverished due to ongoing tribal warfare, and the growth of central governmental power, the Turkoman tribes weren't able to hold on to their ancient, nomadic way of life.

The Soviet rule, beginning in the 1920s, had a disastrous effect on the Turkoman lifestyle, and thus on weaving (as it had on Caucasian weaving). Peoples were forcibly settled under strict state supervision.

There has, however, been a notable recovery in the quality of carpet making in recent decades, with some superb larger carpets coming from Turkmenistan.

We have a number of fine Turkoman carpets & rugs in stock, many dating from the 19th or early-20th century. The various smaller, decorative pieces of Turkoman weaving can be found in the "Bag Faces" section of this website.