Belouch (or Baluchi) rugs are woven by the groups of nomadic tribes who inhabit the border regions of north-eastern Iran (Khorassan province) and western Afghanistan. The Baluchi people also inhabit the region of Baluchistan (an area in south eastern Iran and western Pakistan), although pile rugs aren't woven in this area. 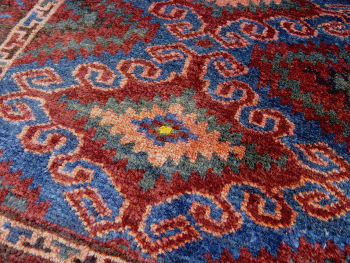 There is little known of the early history of the Baluchis; their nomadic existence, illiteracy, and turbulent history prevented the making and keeping of records. The earliest references to the Baluchis are found in Persian literature, as a people who inhabited the southern shores of the Caspian Sea. It seems that they were forced from this area by early invasions from Central Asia 1000 years ago, and gradually spread south and east over the next 200 years. The presence of Baluchi people in the Khorassan region dates at least to the rule of Nadir Shah (1736 - 47), who moved groups of Baluchis from the south, to form a barrier against warlike Turkoman tribes. More northward migration took place in the 19th century, caused by famine in the south. Today, most Baluchis in Afghanistan are still nomadic (or semi-nomadic), whereas those in Khorassan in Iran are settled, living in villages. 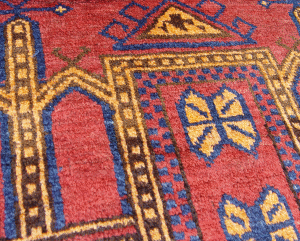 Belouch rugs are most easily recognized by their colours (browns, dark reds, black and blue) and design (very often prayer rugs, with repeated geometric motifs). The pile tends to be a very good quality wool, woven on a woolen foundation. Older Belouch rugs are almost exclusively made using natural dyes, and usually have a kilim-band at either end; the sides (selvages) are black or dark-brown goat hair. Belouch rugs tend to be small, reflecting the nomadic lifestyle of the weavers, with larger carpets being quite rare.

Aside from rugs and prayer-rugs, Baluchi weavings include saddle-bags (khorjin), salt-bags (namakdam), flatweaves (sofreh), pillows, storage-bags, and animal covers and decorations. The finest Baluchi weavings are most notable for their remarkable wool; this wool is taken from lambs, generally from the throat and belly, and is extemely soft and silky. The wool is unwashed, so it retains all its natural oils. Occasionally, older prayer rugs may be found which use camel-hair as the field-colour. The finer old pieces sometimes have a beautiful brocading worked into the kilim-ends.